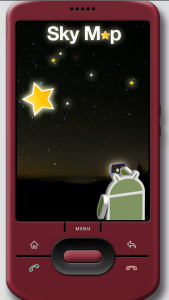 A new Android program called Sky Map can tell you what stars you’re looking at in the sky by pointing your phone in the right direction.  Using the magnetometer, accelerometer, GPS and clock, the phone can tell what direction the phone is pointed in.

I’m impressed by the designers ingenuity in developing the ability to tell absolute direction without using any visual clues.

The program also gives you the ability to search for particular heavenly objects.  And because it doesn’t use object recognition (which would be impossible with most light flooded skies), it will work through walls, ceilings and even the earth (telling you what could be seen on the other side of the world).

One reply on “Someone Please Turn Off The Lights”