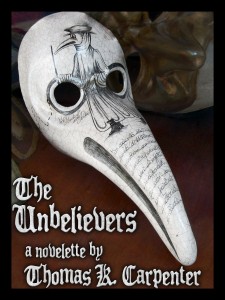 Through my publisher, Black Moon Books, I’m pleased to be releasing another short story: The Unbelievers.

I’ll hit you with a description of the novelette first.

Power exists through the illusion of belief…

Stephen’s sister dies slowly from a wasting disease and only the mysterious Unbelievers offer help if he will deny the “false reality” of the Magus. Can a young boy stand up to the great power in the city? Or will his defiance cost him his life?

This story is one of those tales I really wanted to tell when I first started messing around with the concepts of augmented reality.   And while it’s a simple tale of defiance in the face of great power, it’s a story that resonates through the ages.  Around the time the cover artist was turning in the concept ideas for the cover and I was busy checking over the copy-edits, I was struck by the similarities between my story and the unrest in Egypt.

While this may seem, at first, a little far fetched.  Come along with me for a few feet further.  I will explain.

The causes of Egypt’s unrest are decades old and I would find it hard to explain their complexities in a simple blog post.  But one of the sparks (I apologize for the unfortunate use of this term in it’s context) was the self-immolation of an Egyptian man in protest to Mubarak’s policies.

Lighting yourself on fire with intent to burn to death, is in itself, a crazy idea that one could be put in a mental hospital for.  But yet, people took this one crazy act, one any sane person would not do, as a catalyst for government change.  The two ideas seem so far apart, but yet they are not, as seen through the events in Egypt.

And yet that’s the key point that I find so fascinating.  How one crazy act.  One horrible defiance of reality, that no sane person would or should do, resulted in the downfall of a dictator (yes, I’m simplifying things, but only for the purposes of this example.)

And that’s how we come back to my story and the similarities.  That sometimes, to deny power to those that unfairly hold onto it, one must deny the very fabrics of reality and do things no sane person would do.  How these unsettling events are connected are usually unknown, such as the case of the Egyptian uprising, but sometimes they have a reason and a purpose, though so hard to see to one immersed in that reality.

So if this at all intrigues you, I’ll point you to a few locations to purchase this novelette (which is longer than a short story but not as long as a novella) for the low price of $0.99.

One reply on “New Short Story: The Unbelievers”