Why Write About Augmented Reality? 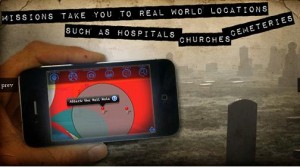 And who am I to argue about that, but given that Angry Birds has dominated our house for the last two months, I was just a little surprised.

Now the first question, one might ask is: “Why are you letting your daughter play Angry Birds all the time instead of doing school work.”  Fine, good question.  But I would answer: “Because she gets her school work done quickly and because it’s actually her iPod Touch that Angry Birds lives on, and if I’m not nice to her, then I don’t get to play.”

Now the second question would be: “Why would she like Paranormal more than Angry Birds?!  Everyone loves Angry Birds!  It practically comes with any smartphone now.  Is there something wrong with her?”

Well, yes there is.  She’s my daughter, first off, and so that puts her behind the eight ball already.  But the real answer is that she has imagination.

I finally got around to loading up Paranormal on my wife’s iPhone last week.  Yes, I have to be nice to her too, or I don’t get to play with her iPhone either.  Strange how they’ve got me cornered like that.  But I digress.

The game loaded quickly and after finding how to turn the music off (fun for about one minute, then annoying) we started playing it.  The game really comes in three modes: investigations, spells and quests.  Wait.  I’m getting ahead of myself.  First, I should start with what the game is about.

The game involves being a supernatural bad-ass with the ability to destroy ghosts, cast spells, and cleanse the land of evil spirits.  I’m not sure what the official line on the game is since it is a movie tie-in, but that’s what we decided at the ol’ Carpenter house hold.

Through out the game, you gain experience, items, and sanity (it is a fictional game after all) for performing the above listed actions (questing, investigations and spells).  The kids immediately took to the investigations, since you can do it right then and there, spinning around with your “camera” and finding ghosts in the room you’re in.  You get more experience for faster and more accurate captures.

Actions in the game are regulated by mana.  Investigations and spells require mana, which regenerates over time.  You can purchase more mana at the store if necessary.  We didn’t need to.

The second part of the game is casting spells.  The hell holes in your area must be cleansed and kept down through spells.  Utilizing a drawing of a pentagram (very cool I might add, and would make my old elementary Catholic school nuns faint at the thought), the spell can be boosted.  This part of the game is a basic strategy game and involves moving around outside of the home to accomplish.

The last part of the game, the part the kids found to be the most fun (though they enjoyed it all), was the questing.  On the top down map, pins appear showing locations of quests.  Quests must be accomplished at the general area of the pin, so some outside adventuring must occur.  The quests don’t involve much beyond going to the spot, a point that could use some improvement in future games like this, but they did provide story items that helped make the experience spooky.  It also helped, as we were wandering around the neighborhood at 9pm, creeping near a quest point, that an owl hooted scaring the b’jesus out of us.

Overall, I give it two big thumbs up and so do the kids.  Ori Inbar promised the world that he would make games that required our children to get away from screens and adventure into the real world.   That’s the game that his company Ogemento delivered.  While there is some “screen time,” once we got outside, they barely looked at the iPhone and were busy filling in the rest of the game with their imagination.  Another plus is that, while the game uses augmented reality, I never really noticed the technology.  The game was more “experience” rather than “gimmick”.

And though I regularly write for Games Alfresco, which is Ori’s blog; I do not receive any compensation for my articles and most importantly, this article.   The app is free, anyway, so there’s nothing to be gained.  So phhtttt…, if you thought otherwise.