Last fall I posted the Augmented Reality Reading List which highlighted the science fiction novels and short stories that have featured augmented reality technologies in their texts.  I wanted to take that one step further and review each book, not only for the technological content, but also as a novel.  I started with Bruce Sterling’s The Caryatids because I received it as a gift for Christmas and because he’s the most logical beginning point given his blog that frequently covers AR – Beyond the Beyond. 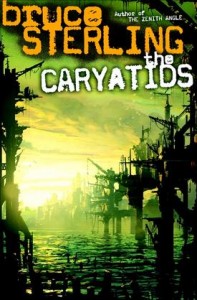 Review of the Novel

Post-cyberpunk novels tend to employ the shotgun, blow it out your eyeballs approach to action, descriptions, and especially human-tech ideas.  If you’re into that sort of thing, which I am, the Caryatids is filled with cloned humanity burning-the-candle-at-both-ends on the other side of a world-altering climate meltdown in which the future isn’t quite a sure bet anymore.

While I tended to get lost on why anything was happening, I decided to strap on the seat belt and enjoy the poetic ballistics.

A second shot hit the museum.  This shock was much bigger than the first, an endless, churning, awesome, geological catastrophe.  The museum reacted with a roller coaster’s oily grace and speed, ducking and banking.  They were suspended in limbo, an epoch of reeling and twisting, rubbery groans and shrieks for mercy.

The novel tells the story of four of the Caryatids, cloned superhumans from a Balkan warlord, who wrangle their pieces of shot-up humanity.  The Caryatids act as the focal point of the story as they careen off their surroundings.  Mila’s personal soundtrack and artistic rezoning of Los Angelos with a giant city wrecking mech-robot entertains while bordering on absurd.  While Sonja’s jaunt across the Chinese dust bowl with her barbaric warlord husband reminds me of the movie Crouching Tiger Hidden Dragon.  Together the four clones examine the roles of near-future technologies in a nature-nurture novelistic experiment.

Technology of the Novel

The world the Caryatids live in is ripe with ubiquitous computing in the form of sensorwebs, especially for the tech-collective Acquis.  The island Vera rebuilds has been saturated in these “sensorwebs” data collection equipment which are advanced versions of a Pachube.  They access the data through a neurological network that allows them to read each other’s mind (only if you’re also wearing a neural helmet), and rework failed landscapes with mech-like bonearmor.  They use augmented reality to superimpose important information on their techno-utopias.  Augmented reality is definitely a minor cast member in this smorgasbord of tech-heady meals, but really, we’re here for the story, the use of AR is just a nice spice.

One reply on “The AR Reading List Review – The Caryatids”