Don't Mess With My Reality (Even If It's Augmented)

Hype Delayed, iPhone AR May Not Come In September

As we collectively disembark on a long journey to a future, hence unknown.  We’ll want to mark our progress as it goes zipping by our technological car windows.

With augmented reality intruding into the general consciousness, we’re going to need ways to explain and document our progress and point to where we’re going.  Currently, there are many ways to describe augmented reality: outdoor, paperless, papervision, marker based, reality browser, spatial computing, iPhone based, etc.  These terms do describe a particular function of augmented reality, but they don’t give a generalized idea of where that description lies in the realm of AR in relation to everything else.

To help define the woof and warp of AR, I propose a simple scale called the Reality-Interface Matrix Scale or RIM Scale.

The RIM scale will be composed of two axis: Perceived Reality (PR) and Reality Recognition (RR).  I chose two axis because AR exists through the mixing of reality and the virtual.  First I’ll explain the two axis, then the interaction between them. 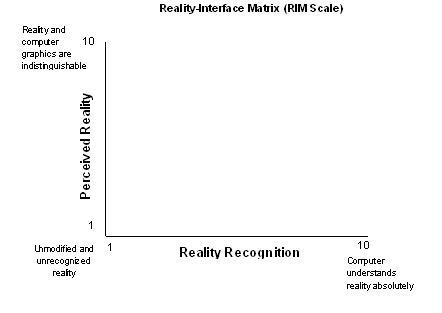 The Perceived Reality axis shows us how the graphics are indistinguishable from reality (on a scale from one to ten).

10 – Completely immersive; identical to reality in all aspects.

2 – Mostly text based information; common boxes and other simple objects can be modified.

1 – Reality as it exists now (non-augmented).

The Reality Recognition axis explains how completely computers understand the world (on a scale of one to ten).

10 – Knows the location and manner of all objects, people and information in the world, completely; and changes as the world changes.

7 – Understands the location and manner of major objects; some minor objects and some people and information; object recognition is substantial; updates on frequent basis.

4 – Major objects, people and information are understood by location; any other characteristics are rare; minor object recognition.  Updates occasionally.

1 – No understanding of the world.

A total score for an application of the augmented reality concept can be given by using the two numbers as a vector (#,#).  Let’s use an example to illustrate the scale like the popular Augmented Reality Magic Trick from Marco Tempest.  It has 228,495 views on YouTube so it should be a well known example.

On the PR (perceived reality) axis, I would give it a three because it uses graphics over flat objects and the immersion is limited (through a screen).  On the RR (recognized reality) axis, it would be a two because the trick required a lot of “set up” and it uses basic markers to align reality.  The RIM scale score would be a (3,2).

Since I’ve given Layar a lot of attention lately, I’ll use the Wikitude Drive as my next example.

The application scores a two on the PR axis because it only uses text and simple boxes for its graphics and a three on the RR axis because its using GPS data on a frequent basis along with other information from the data sphere.  This puts it a RIM score (2,3) which is where most of our reality browsers will fall.

Next I’ll use the Japanese anime show Denno Coil as a third and more advanced version, since we don’t have anything else that actually exists this far up the scale.

In the world on the show, reality is pretty indistinguishable from the virtual, but it requires glasses.  I’d give it an eight on the PR axis.  But since the world isn’t completely “known” by the computers, I’d give it a slightly lower score of seven on the RR axis.  With a score of (8,6), its easy to see that the world starts to get interesting at the upper part of the graph.

With the RIM Scale, any application can be shown in its relation others.  We can also see if the application is stretching the current technology or just revisiting old ideas.  A simple vector can be used to show progress between two applications.

In the graph below, I’ve added some examples and added another layer of information.  The size of the circle shows the global impact of the application.  For example, the Metaio prototyping software can “see” reality down to small dimensions, but its only used in applications for a few people.  I also colored the circles into actual technologies (blue) and theoretical ones (green). 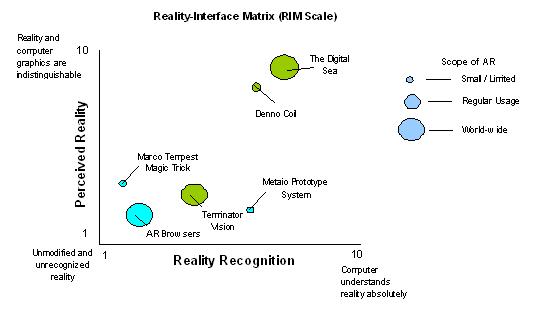 I hope the scale proves useful and helps distinguish one application from another.  It can still use more clarification between the gradations on each axis, but I think it gives the basic idea.  If you have suggestions on how to improve the scale or see problems with it, please leave your comments.  Ideas are like programs, we can always update them to a newer and better version.

(Update – changed the multiplication to a vector score as suggested by David and Rouli, thanks guys!)