As history often proves, holding an empire together is much harder than taking one.  Corruption and bureaucratic bloat sets in, while everyone’s looking out for themselves.  And taking an empire that’s deep into its aristocratic ways is a whole ‘nother story as Heron and the Alexandrians soon find out.

And I swear none of this is a commentary on current political happenings.  I swear.

Just don’t make me put my hand on a bible or anything. 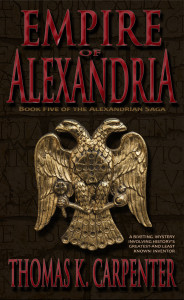 One hundred years after the murder of Julius Caesar, the circumstances of his death could change the course of the fledgling Alexandrian Empire.

Left in charge of the treacherous Roman Senate while Agog heads north to deal with the traitor Marcus, Heron finds the game of politics maddening. Her constant missteps encourage a growing list of enemies while a mysterious benefactor proves too dangerous to trust. As the city races towards a political showdown, Heron must discover the truth about the murder of Julius Caesar—a death witnessed by hundreds and understood by few—before a perilous vote hands power back to the Romans.

The novel can be purchased at Amazon, B&N, KOBO, Smashwords or other online retailers in ebook format for $5.99 or at Amazon in paperback for $18.99.