– Jump to location on Google maps where the content was published

The enhancements to the junaio platform will make it easier for users to search for things of interest around them or create their own augmented reality content and share it with others. Users can publish their augmented reality picture or leave weblinks, text messages, and 3D objects in the real world by geo-tagging them on www.junaio.com. The new enhancements will make it more fun for users to share their content with friends or for others to see with added rating, commenting, and uploading features.
junaio’s goal is to bring Augmented Reality more prominently into everyday use. Last week, CTO of metaio announced the opening of its junaio API to developers to encourage additional content creation and other possibilities such as augmented reality gaming (http://www.metaio.com/media-press/)
“junaio is all about the user having fun with augmented reality and creating their own content to share with friends or for others’ to see,” says Lisa Murphy, product marketing manager for junaio. “We have learned a lot from our users in the 1

st version and are bringing more features that the users want in 1.5 and in future releases.”

junaio is an open mobile augmented reality platform that allows users and developers to create their own augmented content and publish it to the real world. The platform is currently available on the iPhone and allows users to search visually for content generated by other users or locate points of interest such as restaurants, cafes, businesses in a 360 degree live-view. junaio is metaio’s ongoing project to create a social and interactive mobile augmented reality platform in addition to their established professional and online-solutions. To learn more about junaio, visit www.junaio.com or watch the demo video at http://www.youtube.com/user/metaioAR#p/u/5/2_fYcdH2nMY

About metaio
As a pioneer in the area of augmented reality technology, metaio develops software products to allow visual interaction between the real and virtual world. Augmented reality lets you place 3D animations and contents directly into live video streams, but also supports the seamless integration of images from the external user environment. Founded in February 2003, metaio has offices in San Francisco, Munich and Seoul. metaio has more than 160 customers and hundreds of thousands end-users in a variety of markets, including BMW, Daimler, Siemens, Toyota, Peugeot, Popular Science, Gillette, LEGO, MINI, Universal Home Entertainment and Volkswagen.
Media Contact:
Lisa Murphy 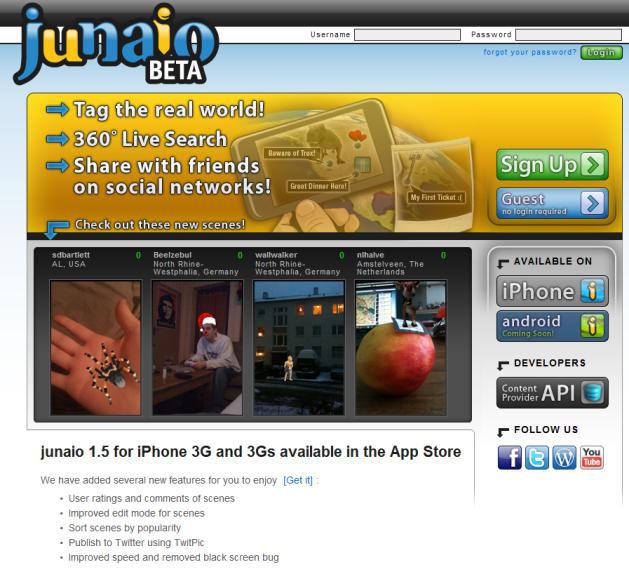