Whew!  Another audiobook by yours truly just hit Audible.  I’d like to say that I’m worn out, but the talented Karen Savage did all the hard work narrating The Digital Sea.  And I can say – without a doubt – she did a fantastic job getting all the voices right.  I knew this series would be challenging since the narrator would have to do both male and female accents in Russian, English, American, South African, and Arab; and bounce that accent between chapters and sometimes in the middle of chapters.  Not only did she do a fabulous job, but she captured the essence of each character as I imagined them in my head.  Bravo!

So if you’re up for a technothriller based in the near-future, look no further than The Digital Sea. 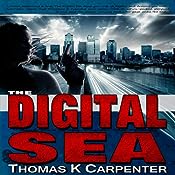 Decay is ubiquitious as the world’s population shrinks under Sagan’s Law. But no one cares, as their lives are consumed by the Digital Sea: an immersive augmented reality that’s always on, seen through eye-screens and controlled by the mind. Zel Aurora, a skilled reality-hacker, can change the Digital Sea with a thought, but all that power can’t save her daughter from a deadly disease. So Zel makes a deal with the Djed, a powerful crime lord that she’s betrayed once before, to stop the new realities threatening his global empire. When the Djed sends along his murderous bodyguard that’s immune to her powers to make sure she completes the job, she’s forced to make a choice that may cost her daughter’s life.

The Audible audiobook can be purchased for $19.95.  Will be available on iTunes and Amazon by the end of August.

And here’s a little flavor of my favorite heroine, Zel Aurora: